Four Scenes From the Pecos 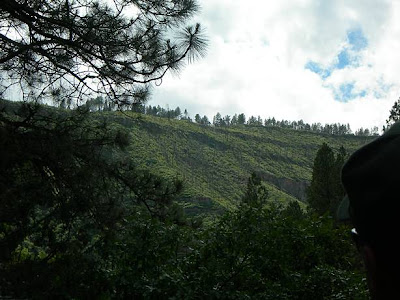 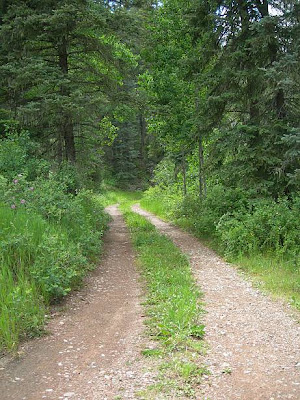 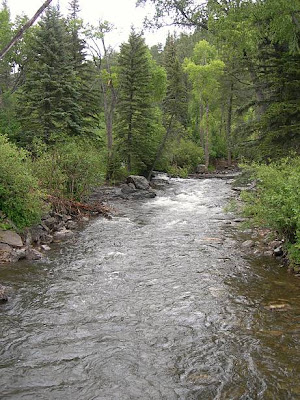 A short view of a long, wild stream 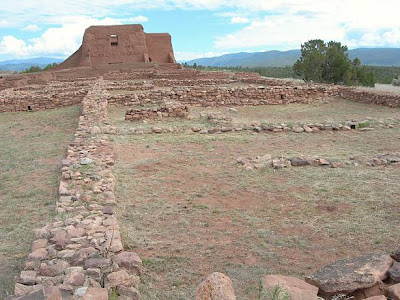 The church ruins at Pecos National Monument
~~~~~~~~~~
No comments:

This week a handful of my coworkers and I have been tagging along with a group of student interns and yesterday we all went up into the Pecos National Forest to see how the rangers do their thang. (Thangs??) It was awesome! Here are a couple of shots of my work buddies: 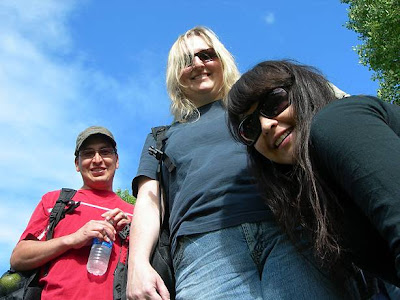 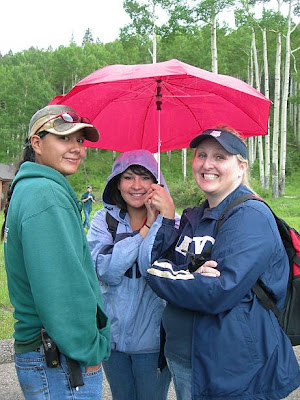 In the Aspens, in the rain. 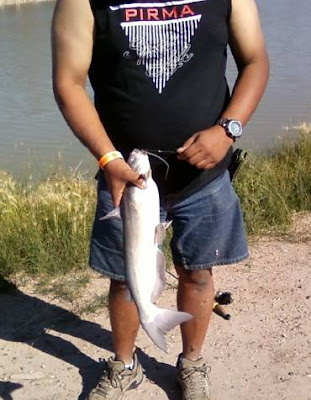 We had a most enjoyable jaunt early Sunday morning, just down the road really, to celebrate Father's Day at Isleta Lakes. I must say, the fish weren't biting much but the bathrooms were immaculate! State of the art, in fact. The lights turned on when you opened the door, and the toilets and water turned themselves on and off as if by magic. Yeah, I've seen it before -- but at a fishing lake? And Joe the guy in the golf cart came around every hour or so to empty the trash cans. Shocking!
We did come home with a 4-filet catfish, straight from Arkansas I'm told, that almost got the best of Junior AND the MOTH (aka man of the house). As usual, Mr. Moth was fishing with two poles (he plays 6 or 8 bingo cards at a time, too), so when he saw the nibble, he handed the pole over to Junior, who is no stranger to the art of reeling in a big one (he got his first child-size pole when he was about 3 or 4).
Junior had his back to me, and I could see that his arms were flexing really strong, but I couldn't see what was happening. Apparently while Mr. Moth trotted back to his other pole, the reel fell off the one Junior was using, but he was trying to wind it in anyway. Finally Dad ran back and gently pulled in this rather large catch and we all decided it was worth getting up at the crack of dawn for.
A few hours later (when this photo was taken), we headed back home but the cat was not finished with us yet. He was flopping around so much the cooler was shaking, and he was MOANING so loudly from inside the cooler, our friends thought Mr. Moth has passed gas! LOL. Finally, after we put the cooler into the back of the truck, he flopped around for one final escape attempt and actually opened the lid of the cooler! I screamed, of course. A rowdy Arkansas catfish -- I think that's a darned fine Father's Day gift. ;-)
1 comment:

Here's who was the first main act at Summerfest last night on Civic Plaza. I'd like to say I "saw" them but actually I "heard" them cause I was volunteering at the OFFCenter art projects booth (and I have the inky sticky hands to prove it! hehe). I could only see the washboard rasta guy but oh boy! they were good and I wish I could have gone down and danced. I liked them better than the later act actually.

Wow, I called Nikia on her cell today and she wasn't driving across country or setting up for a show. Me, Nikia, Deb and Gene met up at the Fiber Fanfare show at OFFCenter, and accidentally got front row seats, with a table even, for the fashion show and storytelling. (I am love you are love we are love...not to mention the spiders and their skinny waists) Sorry, no pictures, I'm too tired! But yay, 3 more converts. ;-)
1 comment:

The Peace of Wild Things

The Peace of Wild Things
When despair for the world grows in me
and I wake in the night at the least sound
in fear of what my life and my children's lives may be,
I go and lie down where the wood drake
rests in his beauty on the water, and the great heron feeds.
I come into the peace of wild things
who do not tax their lives with forethought
of grief. I come into the presence of still water.
And I feel above me the day-blind stars
waiting with their light. For a time
I rest in the grace of the world, and am free.

Email ThisBlogThis!Share to TwitterShare to FacebookShare to Pinterest
Labels: poetry and quotations 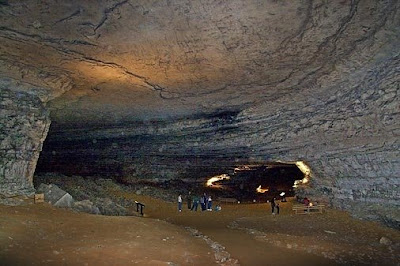 Junior and I are taking a quick trip to my old Kentucky home and last night we bopped down to Mammoth Cave for the coolest evening tour by lantern light. Living in New Mexico, we had visited the amazing Carlsbad Caverns with its eerie formations (and Disneyland-esque lines, international visitors with cameras, and, I kid you not, underground gift shop). But Mammoth Cave (named for its size, not big beast bones...) is a dry cave with, as our guide put it, a good roof, so there are fewer formations. It's kind of like being in a really huge unfinished basement.

We hiked in with 40 people and 10 lanterns, tiptoeing at first, and chatting excitedly. I could hardly contain myself. You can have San Francisco, give me a mother of a cave. Not to mention the temperature was cool enough that you could exert your fat self and not even sweat. Speaking only for myself of course. And with Junior, you never know what will entertain him -- but he has fallen in love with Kentucky.
The night before we had walked my old neighborhood where I was reunited with (and he was awestruck by) fireflies in the grass, towering oaks, gracious maples, peeling-bark cedars, crabapples and dogwoods. The neighbors I've long forgotten -- I couldn't even remember for sure where my old boyfriend's house was. But the leaves reached out like the hands of old friends.
The evening before we had hiked my sister's river preserve with her big dog (not her preserve, just the one she contracts to assess as an environmental biologist), where we brushed angelica taller than a basketball player, grasses and wildflowers she had seeded the year before. We tiptoed down to the river to throw a stick or two, and Junior declared he wanted to live there. On the way back, the great blue heron we'd spotted on the way down raised up, circled the meadow, and flew out of sight between high trees.
Sigh. I do need to apologize to old friends and new for not arranging a get together. You understand why. Thank you 8-) Next time, I promise.
~~~~~~~~~~
1 comment: Flowers for Kristina
Originally uploaded by mary_tafoya
No comments: