The new studio is far from "done," but then again neither is the den, the living room, or our bedroom. At work I'm assigned to an intensive project and I ended up working extra hours this week. Last night (Friday) I was so beat and as usual the house was full of boyz. Nikia couldn't come out and play and my fingers were itching to get into something, anything creative that did not involve going outside in the heat. 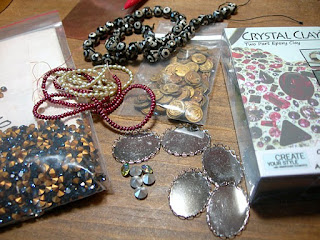 So I said to myself -- you're going to make something. Before the sun goes down. And you don't have time to be perfect today. So the rule was -- it would be Crystal Clay and I would use whatever materials are within arm's reach. Oh yeah, challenge on, self!


Fortunately I had been to Thomason Stone recently so I had micro pearls handy, faceted banded agate eye beads (what else does a girl need???) and some really cool mini Indian head penny charms I bought online. I grabbed some silver lacy edge settings and originally planned to do six of these in one setting (overly ambitious, my creative self is). Naturally, I grabbed some rhinestones too. Gotta have a little bling. 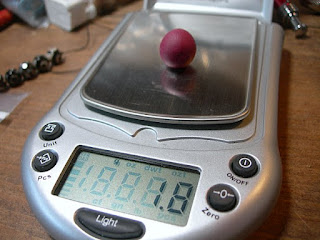 I know I did that tutorial on measuring clay with your eyeballs, but since I have this nice scale I used it. It's important to get the right proportions with epoxy resin clay or it will stay soft and sticky, just like liquid 2-part epoxy. 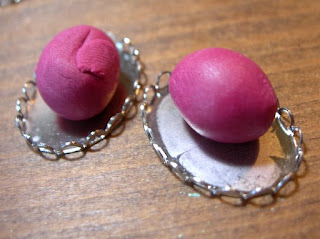 The scale made it easy to mix just the right amounts for two settings. 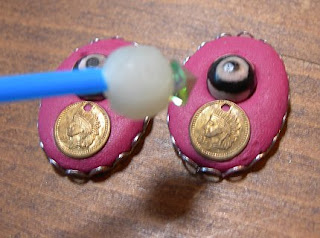 After smoothing the clay into the settings, I started pushing things into the resin clay. My usual rule of thumb is to push objects halfway in. These wax sticks help pick up larger objects. For the teeny things, I use tweezers or the tiny waxed toothpicks that come with the Crystal Clay. 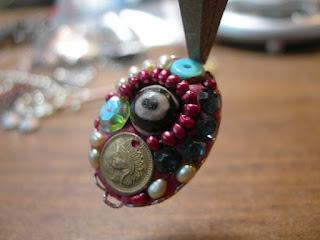 After the clay started to set up but before it was completely cured, I pried open a lacy loop at the top and bottom of each setting, to use later as a hanging loop. I'll straighten these later, I just wanted to release them from the clay for now. Later, I'll also polish the clay and wax off the tops of the beads. 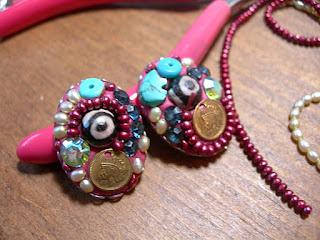 An hour later, I had these two pendants curing (or cabochons for bead embroidery) and it only took that long for my jewelry table to look like this: 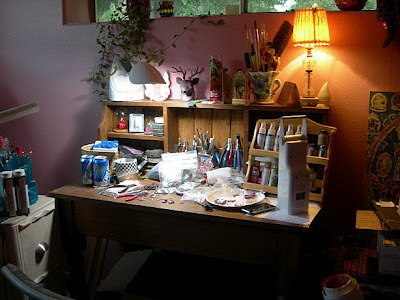 I guess my new studio has been christened! And look, the sun wasn't even down yet. Do I like the pendants? Not that much. But it's ok, I made something. Whew. 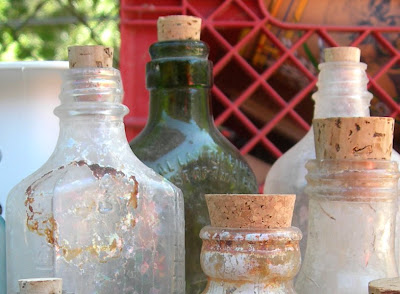 Corks are getting expensive these days. I like to keep an assortment on hand for my vintage bottles. So I was elated when the MOTH brought home a big bag of them this weekend.

But I've often wondered -- what is the appropriate cork size, anyway? They may fit the opening just fine, but some seem too short and  others seem way too tall. Is there some kind of rule of thumb for what height proportion is best? (Hey it's a reasonable question. We have rules of thumb for flower arranging, right?)
~~~~~~~~~~ 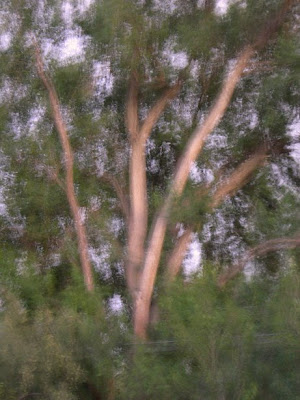 I took this photograph during the rainstorm the other night. I was hesitant at first to post it because technically it's a bad photo. But I love it. Here it is, unretouched. It looks like a painting because there wasn't enough light, so the image blurred. But to me it kind of shows the essence of this tree, which by now we think of as an old friend.
~~~~~~~~~~
No comments:

Clouds All the Way to Heaven

It felt as though we were at the bottom of the ocean, looking up... 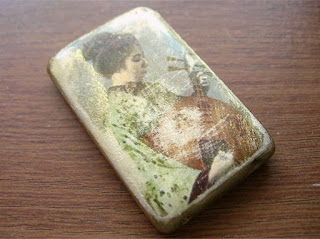 Here's how I whipped up this dreamy focal bead from a two-holed bamboo tile bead and a miniaturized collage image, from my collection of old geisha postcards. The finished piece reminds me of an antique porcelain shard, but the postcard image dates only from the 1920s and the bead is brand new!

Tools and Materials You'll Need
1. Cut out the image.  I like to round the corners a bit.


2. Glue it to the bamboo bead.  I like to glue the image to the not-so-pretty side of the bead.
Apply glue (I used The Ultimate by Crafter's Pick) to the bead and burnish from the center of the image out. Press firmly to adhere the edges to the curved surface. 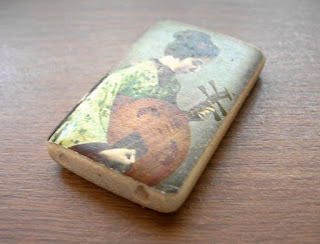 3. Sand the edges and rough up the image.  I like to use a multi-grit foam nail sanding block from the beauty supply store. Sand away any unadhered paper around the edges, and very gently sand away "unimportant" parts of the image. 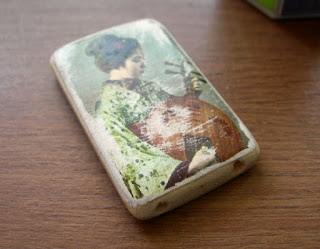 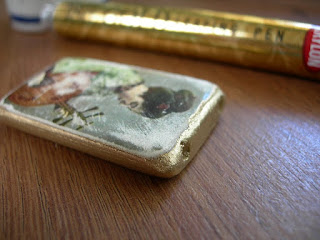 5. Apply and wipe off interference gold acrylic paint.  This adds a transparent shimmer when the bead is turned in the light. Wipe the paint away from important parts of the image. You can use your fingers or a damp paper towel. Let dry. 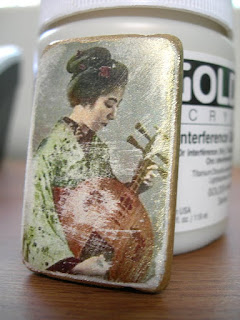 6. Apply 2 coats of yellow tinted satin decoupage medium. This seals the leaf and helps protect the image, and it also adds depth and dreaminess to the antique-looking piece. 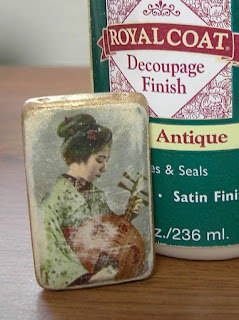 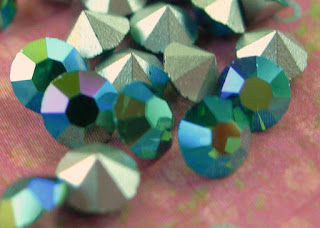 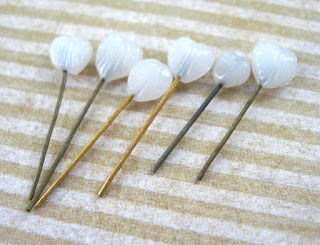 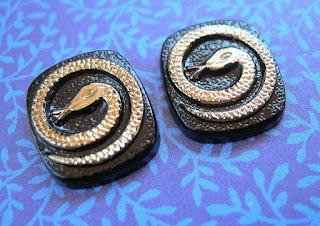 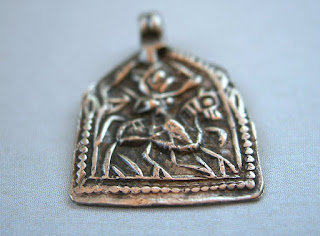 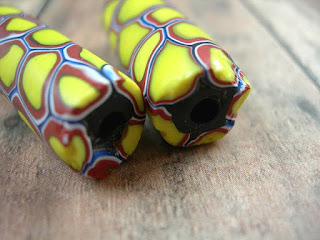 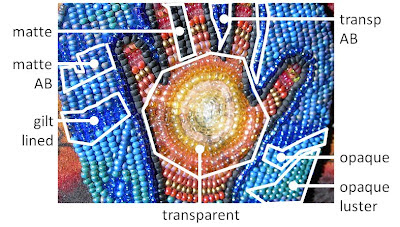 So, back to the bead finishes. I labelled the image above with various types of bead surfaces used in the bead embroidered piece. Some finishes tend to cause the bead/color to:
Using opaque beads as a "baseline," in my experience I've found that matte beads and transparent beads tend to recede into the background more. This is because matte beads are literally desaturated by their lightly etched surfaces. This causes the beads to be less reflective.

Transparent beads (as long as they aren't lined with reflective silver or gilt) tend to recede because they are often in shadow, or dark threads show through them, or they just plain don't contain as much hue as our baseline beads, the opaques.

Again using opaque beads as our baseline, some beads tend to attract more attention due in part to their surface finishes. Metal lined transparent beads, beads with a lustre or AB (rainbow) finish, and metallic beads, tend to come forward, reflect more light, or appear more intense than opaques.

Once you understand how a bead surface tends to behave in your composition, you can manipulate those surface finishes to create emphasis in a design, create a varied surface effect, and use other tricks to get parts of your composition to stand out more than others.

Last night I slept for 14 hours. From 4:00 pm, when I laid down for a quick nap, until 7:00 am this morning. Smoke and heat and a long week at work must have done me in!
And naturally, it being summer in this, our downtown desert, and me being to old to force things any more, I've been spending more time on my patio than on my blog. 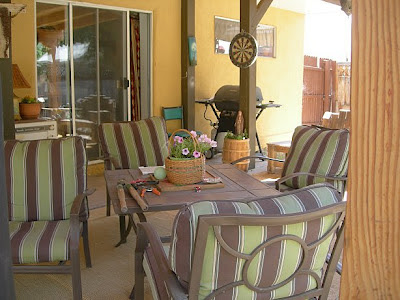 Not to mention that whenever I say I'm going to do a few posts on this subject or that topic, I end up wandering off in a completely different direction. So my last post says "over the next few days..." and then I drop down the rabbit hole.

This time the rabbit hole has been potted annuals and perennials, citronella candles, birdsong and binoculars, and long, quiet evenings listening to crickets. It's been heaven! It had gotten suddenly hot around here, but a couple of weeks ago, it cooled down to New Mexico normal -- heat stroke days and cool, breezy evenings. The ceiling fan we installed a couple of summers ago keeps the covered patio tolerable almost all day long.

So, in the mornings, it's outside for coffee and prayers and birdsong. After work, it's watering the plants and blowing the dust off the furniture with the MOTH's leaf blower. In the evenings, the MOTH has been reading aloud while I doodle flowers into my sketchbook. We've got our bird books and binoculars at the ready, bottles of icy cold water for rehydration.

Not to worry, dear blog friends -- and there seem to be more followers every week so I don't want to disappoint -- I've got more bead surface finish photos and a quick tutorial, not to mention the new studio diary at the ready. It's a question of when I'll wander back this way from my summer perch on the patio.

Email ThisBlogThis!Share to TwitterShare to FacebookShare to Pinterest
Labels: MOTH

Have we talked about bead finishes?

I walked into my studio today and the morning sun was pouring in from the East. (Because I still haven't put up curtains on that side of the room...) I had a small bead embroidered wall piece leaning against the back of my table, ready for hanging.
﻿
I confess I hadn't looked at it closely in a long time, but today the bead surface finishes really played across the whole (little) composition. Do you see how each different color above tends to come forward or recede? That's primarily due to the beads' surface finishes.
Can you see the differences in the bead surfaces, and how they reflect and absorb different amounts of light? Even the differences between the plain old opaque beads (the teal/turquoise blue above the green) and the opaque luster beads (the green beads) stand out differently because of their finishes.

This all made me realize that I don't talk about bead surface finishes much in the current incarnation of  my color theory class, now that I've migrated from lecture to hands-on workshop. So I thought I'd talk about it here over the next few days.
~~~~~~~~~~
No comments: